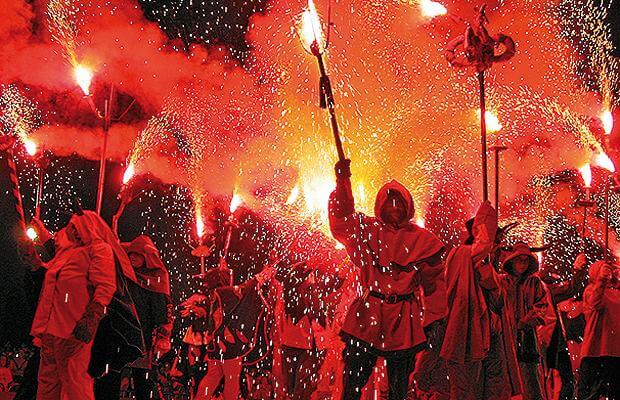 This week we hear from Indigo Atha who has also joined us from the US. Thanks for this great post about this uniquely Barcelonés festval Indigo!!

La Mercè is a week-long street festival celebrated annually during mid September here in Barcelona, Spain.  Since it’s establishment as an official Catalonian holiday in 1871, it has grown greatly in popularity with both locals and tourists.

Things you can see and enjoy during the festival include: street parades filled with giant paper maché characters, mythical creatures, depictions of ancient Catalonian royalty, and groups of traditional drummers.  Beautifully decorated horses and their riders walk in unison during the age-old procession. Onlookers of every age and nationality gather by the thousands to join in the party.

Throughout different neighborhoods in Barcelona, the Catalonian cultural phenomenon “Castellers” or “Human Towers” takes place. As the descriptive title implies, a structure of 7-8 levels of people, balancing on the shoulders of their teammates, is carefully formed. The tower consists of many strong adults standing in a circle on the ground to form a foundation. Increasingly smaller and younger people climb up and balance on one another to build levels. The last layer is typically topped with a 4-6 year old child, who must bravely climb up each layer of humans and balance on the very top of them. Huge crowds gather in shock and amazement.

There are about 600 other smaller events spread throughout the plazas, streets, museums, and parks of Barcelona throughout La Merce. The city is alive with street performance, theater, tours, musical shows, fireworks, art, light shows, marching bands, puppets and extravagant decorations. Most entertainment is free and easily accessible…if you can make your way through the crowds!

This uniquely stunning Spanish celebration is a must see for families with children and young people alike. It is enjoyable in every way, as the weather during mid-September in Barcelona is warm and lovely and the city has so much magic to offer.

For more information about our Beginner Hairdressing Courses or any other courses contact us at info@barcelonahairacademy.com

Request a Call
Go to Top